Our Pledge to Mother Earth

CUHK commits to carbon neutrality by 2038 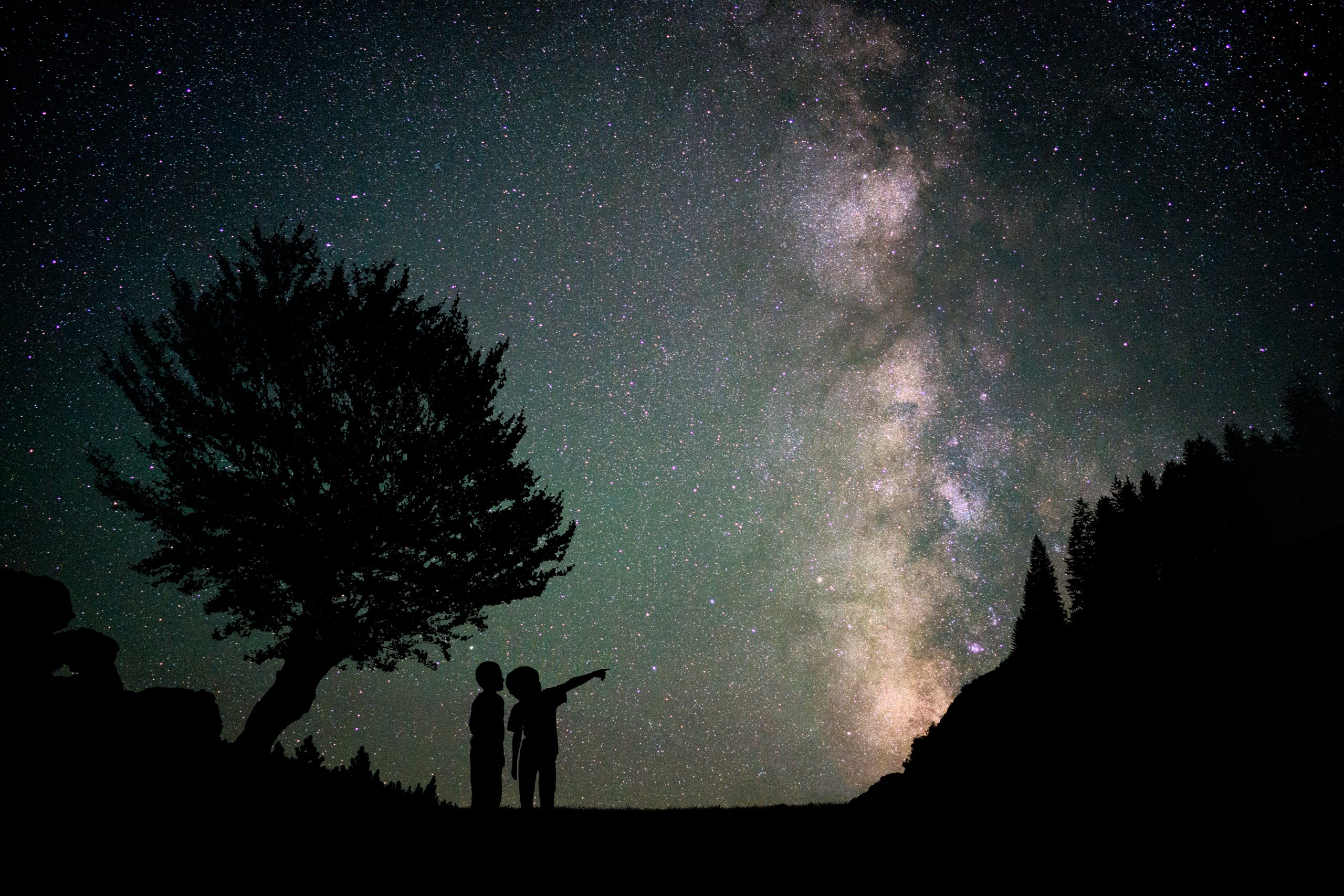 We live in a world whose temperatures have already

above pre-industrial levels.  We still have a chance
of salvaging our future if we manage to prevent temperatures from rising above

Fossil fuels, on which our modern life and civilisation is built, have proved to be both a blessing and a curse.  They have given us cheap, easy-to-access energy and driven technological, social and economic advances that previous generations could scarcely have imagined.  But although coal, oil and gas have brought us prosperity and modern amenities, they have also polluted our environment, through the release of carbon dioxide and other heat-trapping gases into the air.  Our reliance on fossil fuels has initiated a terrible cycle of climate change, characterised by global warming, droughts, floods and extreme weather events.  We live in a world whose temperatures have already risen by 1.1–1.2°C above pre-industrial levels.  We still have a chance of salvaging our future if we manage to prevent temperatures from rising above 1.5°C—a goal agreed internationally in 2015 in Paris and first projected to be viable at last year’s Glasgow climate conference.  However, keeping below this 1.5°C threshold means a complete end to fossil fuel emissions—whether from industrial processes, agriculture, or deforestation—by the middle of this century.

Like most other governments around the world, the HKSAR Government has pledged to reach ‘carbon neutrality’ by 2050, and has set a series of intermediate targets to meet to make sure we make good progress.  ‘Carbon neutrality’, like all climate terms, needs a word or two of explanation.  Carbon is a chemical element which ranks sixth in the periodic table, and its molecules are building blocks for humans, animals, trees and soil.  ‘Carbon’ here stands for carbon dioxide, the primary greenhouse gas and, in an expanded fashion, all the greenhouse gases such as methane, produced by animal farming and oil drilling.  ‘Neutrality’ refers to that blessed state in which we emit virtually no greenhouse gases—either by cutting emissions, removing them from the air by planting trees and preserving nature reserves, or by offsetting them through investing or engaging in emission cutting activities elsewhere. 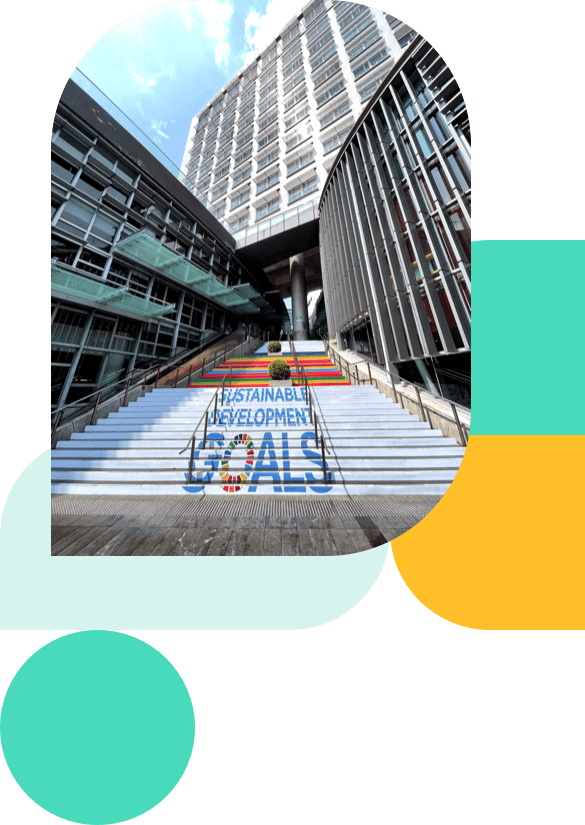 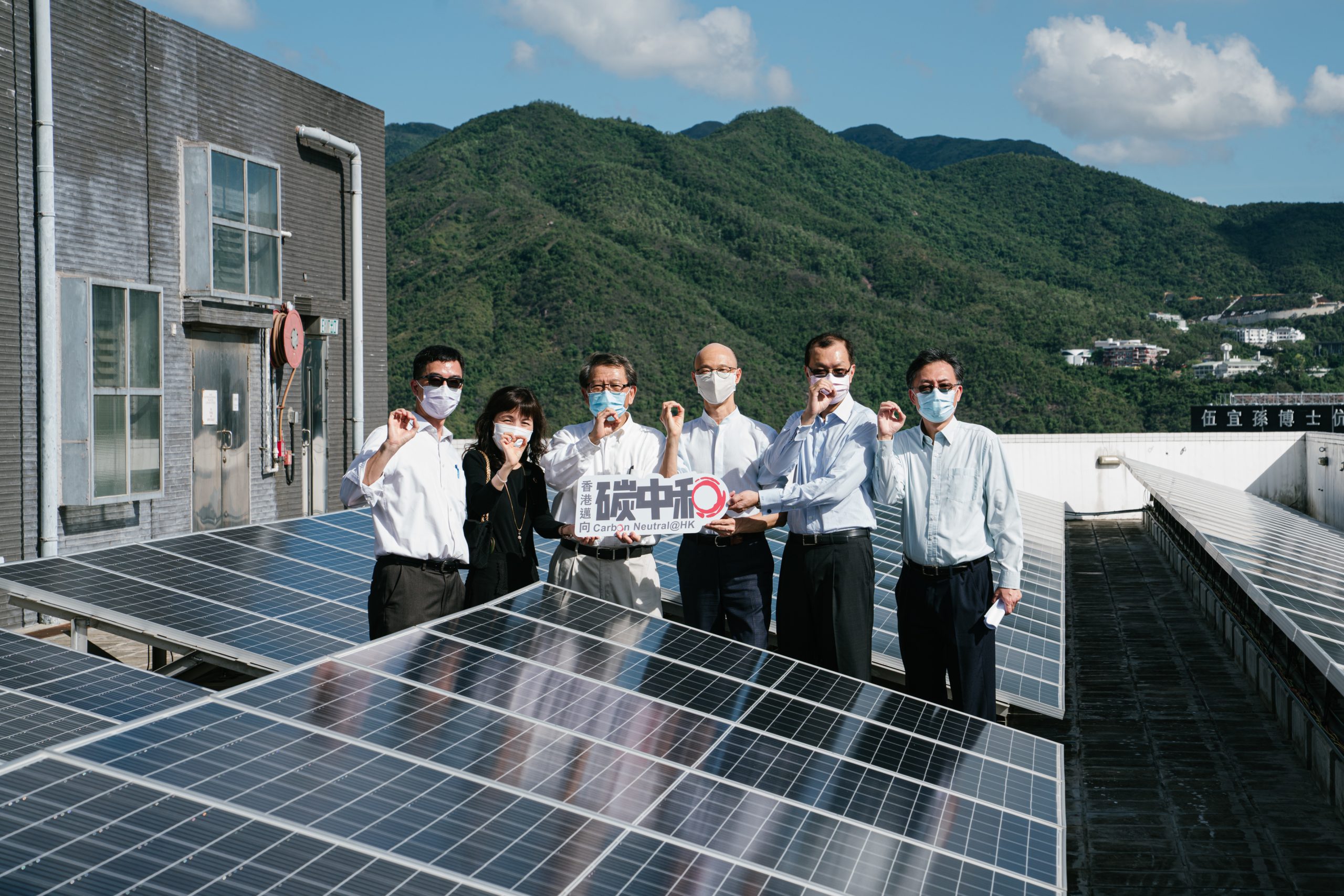 At CUHK we are deeply aware of the climate emergency, and have no intention of waiting on events.  We have already pledged to achieve carbon neutrality by 2038.  As carbon dioxide has a lifespan of about a century in the atmosphere, we have to reach carbon neutrality well before 2050 to guarantee that our planet remains below the critical 1.5°C.  In 2020/21, the University released the equivalent of 39,494 tonnes of carbon, down 26.7% from the previous year.  The reduction was probably influenced by the pandemic lockdown, but is an encouraging figure all the same.  We are determined to keep up the good work.  We are confident that we will be successful, as the Green Office Programme and the Energy Conservation Incentive Scheme and Energy Efficiency Implementation Fund—funding schemes which were introduced in 2014 and 2020 respectively—have enabled us to make significant electricity and emission cuts during recent years.

CUHK has the largest university campus in Hong Kong.  Situated on a tree-clad promontory overlooking Tolo Harbour, this campus boasts an impressive variety of plants, animals and insects.  Our staff and students, who are privileged to work in one of the most attractive university environments in Hong Kong, have every incentive to care for their environment.  Every day, the University’s beautiful natural setting preaches a sermon on the virtues of sustainability.  In many different ways—protecting the animals, bringing their own bottles and cutlery, walking around the campus instead of taking buses—our staff and students are doing their bit to instil a greater awareness of the importance of greenness.  The Sustainable Development Goals Action Fund bears witness to their efforts.  Staff and students have thought up creative new ways of promoting the United Nations’ Sustainable Development Goals, ranging from trips to wet markets to explore how to reduce the use of plastic bags, to upcycling workshops, to the recent craze for ‘plogging’ (picking up litter and jogging).  As a university that serves and shares in the agendas, concerns and passions of the day, we have an obligation to green our operations and to drive social, attitudinal and behavioural changes.  We consider it our responsibility to work with members of the public to resolve the climate crisis and restore the health of our planet. 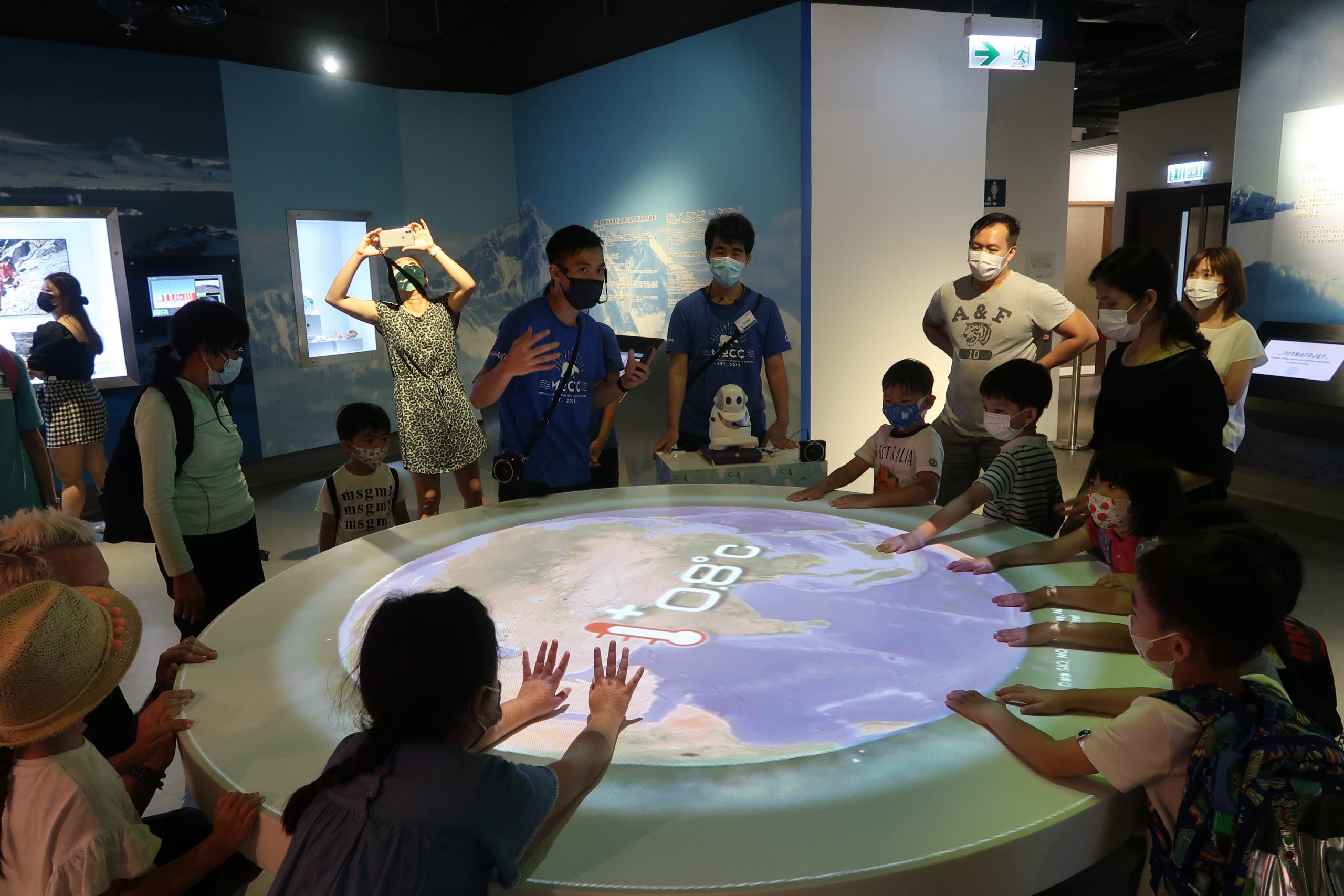 Climate education at the Jockey Club Museum of Climate Change
CUHK students participating in an upcycling workshop by a student-run startup, 180DC@CUHK 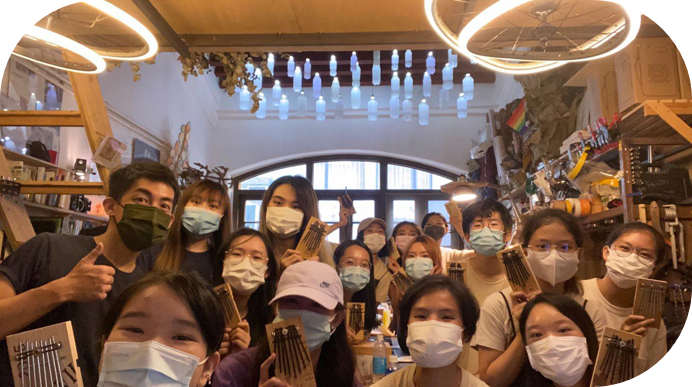 Between now and 2038, how shall we go about reaching carbon neutrality?  Firstly and most importantly, we are cutting back on our reliance on fossil fuels, through electrifying our campus transport and enhancing our electric vehicle charging facilities.  We will apply renewable energies, such as solar power systems, more widely.  By sticking with our green building practices—use of natural light and ventilation and maintaining immense connectivity that makes for walking, we will both lower our energy consumption and help to instil low carbon habits in university members and visitors.  Conservation of plants and the greening of building envelopes and rooftops soak up and store carbon, while also keeping the heat down.  Our green office initiatives will be taken even further in the near future.  We intend to further cut emissions and improve the efficiency of every joule we use.  We have recently commissioned a consultancy study to develop a road map to carbon neutrality.  The Jockey Club Museum of Climate Change and the Hong Kong Chapter of the United Nations’ Sustainable Development Solutions Network (SDSN Hong Kong) are giving us their full backing.

Ideally, we need to achieve net zero emissions by stopping pollution at source.  Unfortunately, this is not always possible.  Accordingly, where we cannot reduce emissions because they are generated by activities which are indispensable to the University’s mission, we are determined to compensate in other ways.  We can reduce our carbon uptake by planting more trees, for example, and offset some of our unavoidable emissions by engaging in proven, meaningful carbon removal initiatives.  Throughout history, nature has rewarded us with her bounty.  It is now time for us to repay the compliment. 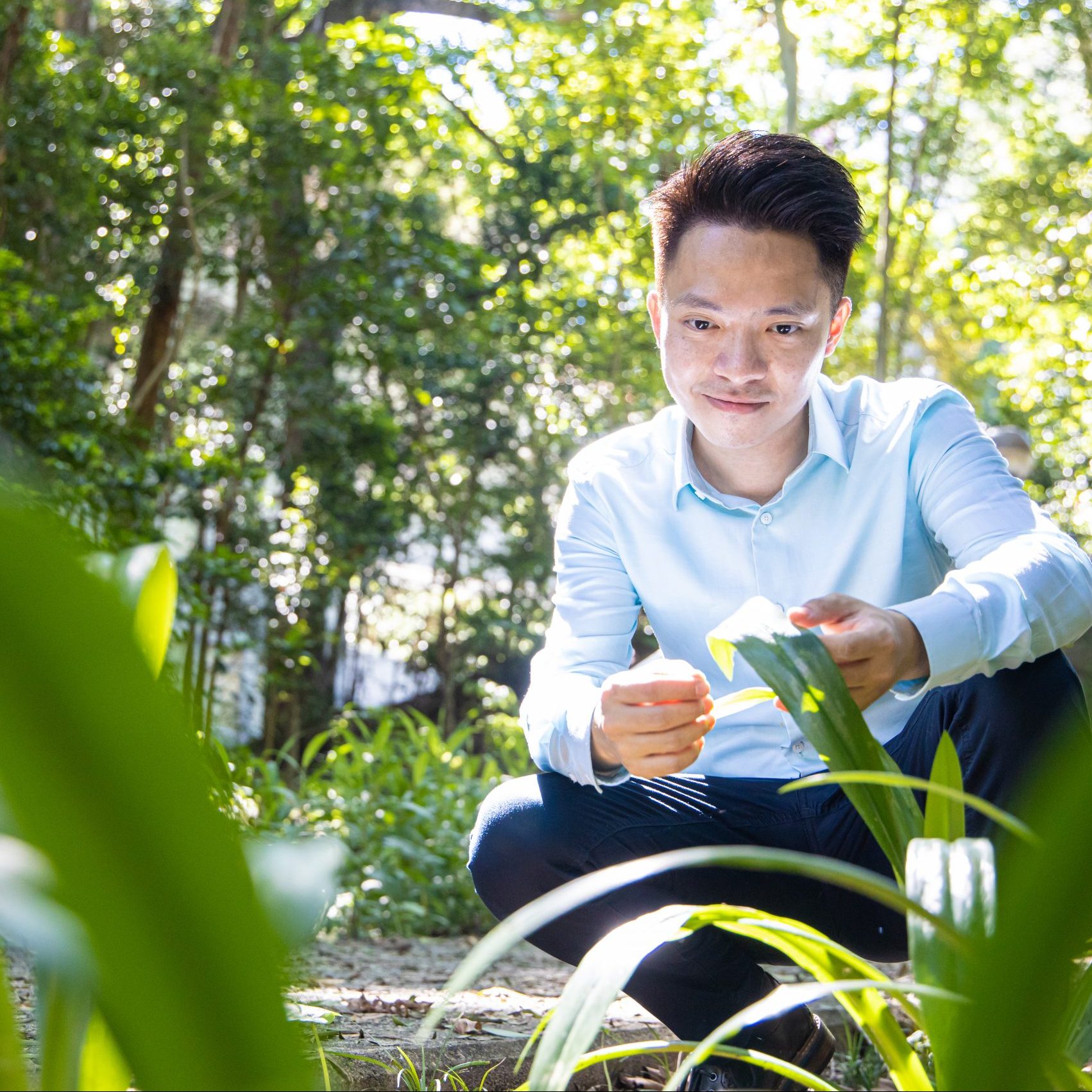 The future is in our hands