A method for rapid and early detection of a dreaded banana disease ravaging across Africa for almost two decades has been developed—thanks to a CUHK genetic engineering team that won gold at the International Genetically Engineered Machine (IGEM) 2019 Giant Jamboree held in Boston, US. The team comprised of 12 undergraduate students majoring in interdisciplinary fields from the School of Biomedical Sciences, the School of Life Sciences and the Department of Biomedical Engineering at the University involved in a project named ‘Banana Saviour: The X Sense’.

Their award-winning invention is a portable test kit that can protect banana plantations from Banana Xanthomonas Wilt (BXW), a deadly agricultural disease caused by the Xanthomonas campestris pv. Musacearum (Xcm) bacteria, while potentially saving the livelihoods of millions of banana farmers dependent on the crop to provide them with an important source of household income. 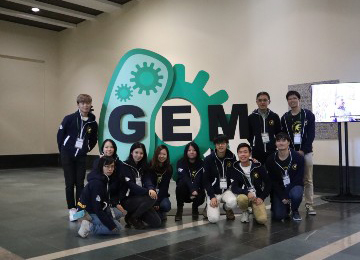 More than a Tropical Fruit

Bananas are one of the most popular fruits rich in carbohydrates and potassium, but for the people in Africa, they are an important cash crop contributing to half of the household diet in one third of families in Rwanda. In 2016, the retail value of banana trading was around USD20–25 billion.

But banana trees and the livelihood of plantation workers in Africa have been at the mercy of BXW, first reported in 2002, which can result in severe yield loss as high as 100%, if intervention and control are delayed. Xcm, the bacteria behind their infection, can be quickly transmitted by soil, air, farming tools and infected plant materials. Tanzania and Rwanda saw a 35% drop in sales and doubling of banana price due to BXW. In Uganda, production in 2014 was halved, compared with 2012, and the banana farmland declined 39%. Other banana breeding regions in Central and East Africa, from the Democratic Republic of the Congo to Kenya and Burundi, had also been affected.

Common symptoms of the disease include yellowing of leaves, drying of male buds, uneven ripening and the oozing of a creamy white sap, but when banana farmers start to notice these signs, it is usually too late. With an incubation period of up to several months, the disease may have spread widely before the symptoms surface, causing the plants to wilt and die. To remove the pathogen, the infected host plant must be destroyed, along with the whole plantation.

Recognizing the urgent need to identify the affected plants early, the CUHK research team set out to develop a rapid, low-cost and an on-site diagnostic tool for BXW to help farmers, plantation workers and quarantine departments detect the disease early, intervene and stop its spread.

At the outset, participants of the ‘Banana Saviour: The X Sense’ project engaged in extensive literature research on the disease and interviewed stakeholders from various fields, including banana breeding experts from Guangdong Academy of Agricultural Sciences, medical and genetics professionals, quarantine workers and the general public.

Originally, the team had sought to create a genetically engineered banana strain that is resistant to the infection. However, from a survey conducted with predominantly university and high school students, it was found that 30% of the respondents preferred wild-type food over genetically modified ones. As a result, the project’s research objective was changed to develop an early detection method aimed at avoiding the spread of banana disease in the first stage of infection.

Seeking an optimized research design, the team members also paid a visit to the Institute of Pomology of Chinese Academy of Agricultural Sciences where they interviewed Vice Director Li Chunyu, who pointed out detection methods for BXW were still limited and that a worthy research area would be the on-site detection of Xanthonomas bacterium. His words inspired the team to develop a detection kit for BXW that banana workers could take to the plantations by hand.

Back at the laboratory in CUHK, they started to conceive a quick detection mechanism by transforming E.coli bacteria into a receiver of BXW bacterial communication signals. Building on experiments of a similar kind conducted by other universities, the CUHK team modified the E.coli system and successfully prevented occurrence of false positives. The testing method they developed manipulates the DNA of E.coli bacteria to produce proteins to detect Xcm’s chemical signals. The team also engineered a circuit system inside the E.coli bacteria cell. The presence of Diffusible Signal Factor (DSF) will trigger the system and release a red chromoprotein. By dipping a sample of infected banana into a specially-designed test solution, the latter will turn red, indicating the presence of Xcm bacteria.

An outcome of the research study is a portable, sensitive and low-cost test kit that allows detection of even a low concentration of Xcm bacteria, as is the case during the early phases of infection. 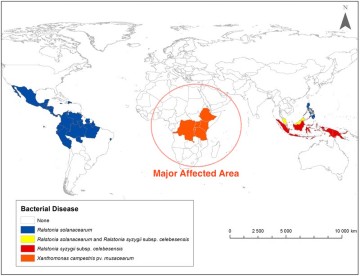 Banana trees and the livelihood of plantation workers in Africa have been at the mercy of BXW, first reported in 2002, which can result in severe yield loss as high as 100%, if intervention and control are delayed.

Professor Chan Ting-fung, one of the team’s instructors and associate professor of the School of Life Science, remarked, ‘The students have done a great job in preparing for this project. In order to understand the real-world issue of banana diseases, they have travelled to Guangdong to talk to experts in banana breeding. Besides the innovation they have put into the project, I am also impressed by their persistence. They encountered a major setback and had to start almost from scratch half-way through their preparation, but they endured and worked very hard to achieve what they have set out to accomplish.’ 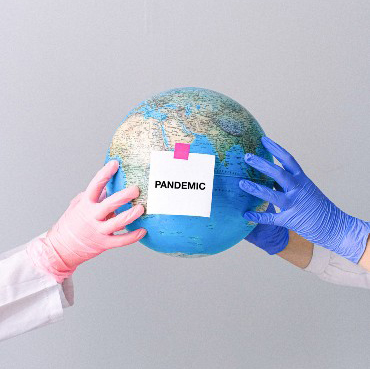 The COVID-19 pandemic hit the entire globe in 2020, causing millions of infections and the loss of precious lives worldwide. While the virus continues its spread across regions, experts from different disciplines are fighting it on multiple fronts…